On Monday, May 2nd, Politico published a leaked draft of a Supreme Court decision, authored by Justice Samuel Alito, on the Dobbs v. Jackson Women’s Health Organization case, originating out of the state of Mississippi.

The draft showed that the court could strike down the 1973 Roe v. Wade decision that legalized abortion, following a February vote by the Justices.

In response to the leak, well-funded far-left social activists immediately started using every tool at their disposal trying to pressure at least one conservative Justice to change their vote.

With the media no longer trying to give the impression they are unbiased, those fighting to preserve a nationwide abortion “right” appear to have, standing invitations to appear on the major news networks and the entertainment industries are all pushing messaging such as it’s “a women’s body, a women’s choice.”

As the court is set to meet on Thursday, Politico has just published more leaked information. To the dismay of those coordinating the illegal protests at the conservative Justice’s homes, nothing has changed with at least 5 Justices still ready to end Roe V Wade.

The outlet reported Wednesday morning that Alito’s draft opinion is still the only circulated draft in the abortion case and that no votes have changed while the court is waiting for the dissent opinion to emerge. 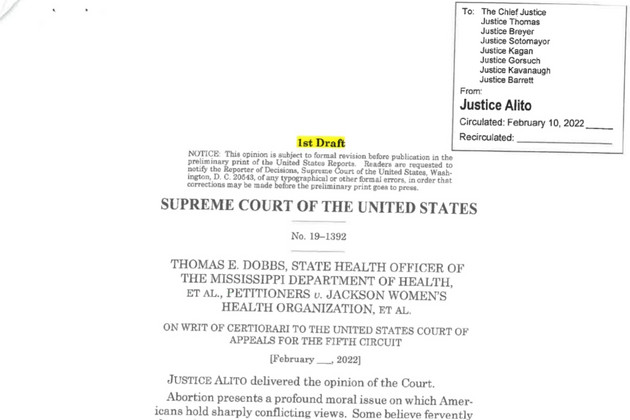 “[T]here’s no sign that the court is changing course from issuing that ruling,” the report said.

The initial draft majority opinion by Alito said “Roe was egregiously wrong from the start,” Politico reported on May 2. Read more